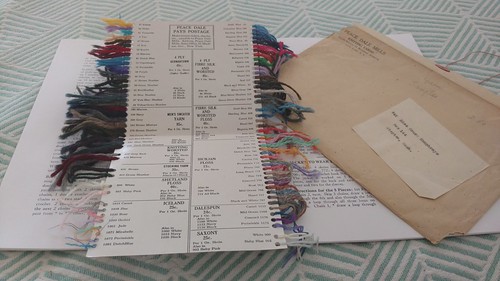 This post is a little different than my other posts on this blog because it also relates to a project of mine, which is the topic of my other blog. However, the focus here is the amazing yarn samples, so I thought it fit better here!

I've recently started knitting a pattern from the out of print reprint of the 1916 Lion Yarn book for an upcoming suffragette costume.

I wanted a little period guidance in choosing contrast colors. The book suggests the new tango red, tango blue, or kelly green shade of their Shetland floss. I don't want red because red, I don't want blue because my skirt is going to be blue and I don't want to look like I'm trying to match the skirt, I want the this is my wardrobe and it works together because I buy things I like vibe, and I don't want green because everything I knit for myself in the last year, except for the poor, lost Princess Royal scarf is green and white.

So, I got out my Peace Dale Yarns sample card to help pick a color. I don't know exactly what year it is, but I can narrow it down. I have a reprint Peace Dale knitting book from 1922, and it mentions new Sicilian floss. The sample card has Sicilian floss. I have the original envelope the sample card was mailed in, and it has a 2 cent stamp. According to Wikipedia (I know...) 2 cent stamps were in use 1885-1928, with a one cent increase in 1918, presumably because of the war. Now, while not exactly the year of my sweater, I think it's close enough, especially when it comes to historic knitting, of which we have so much nothing. (I think I'm going to go with the plum for my sweater, which is similar to the purples shown on the card...) 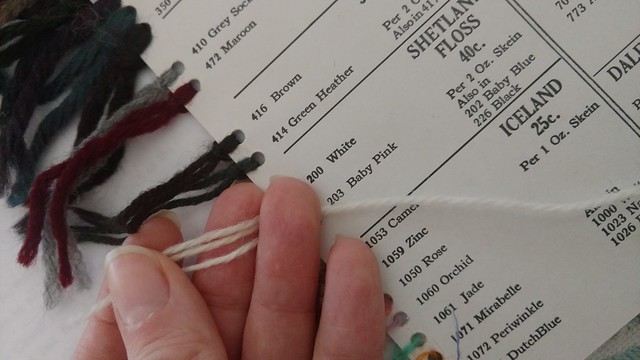 Now, here comes something very exciting. The pattern calls for Shetland floss. It seemed strange looking at the picture of the sweater because Shetland is very lightweight in historic knitting. The 1860 mariposa hood from Godey's calls for Shetland for the lacy part . Obviously not what this pattern meant--this pattern wouldn't work with lace weight! The pattern very kindly stated that the 84 stitches should be 14 inches, or 6 stitches to the inch. So, sport weight. It also called for size 5 needles, which amazingly line up to modern sizes--I'm using size 5 and getting gauge. There were many different sizing systems for historic needles, frustratingly. And even now there's no international standard. At least we have millimeters.

Anyway, to the exciting part! Though a different company, Lion Brand versus Peace Dale, Peace Dale had a Shetland floss on their sample card! And look! Though my yarn is a 3 ply (JaggerSpun Maine Line3/8), and the yarn in the sample is a 2 ply, they are so similar! When you put just a tiny bit of tension on them, they really do look the same. The original is a slightly looser twist, but most of this is disguised with tension.

I don't think this is the right yarn anymore. After looking at more 20s patterns and seeing that they called for Shetland floss at 5 stitches an inch, I experimented. I made a sweater with the three ply yarn above, which came to 5 stitches an inch and worked, but the sweater was denser than the picture. The three ply was obviously heavier than the patterns that used Shetland floss in the Bear Brand Blue Book c1921 that I bought on Etsy. With a little experimenting on my current project, which calls for size five needles and Shetland floss, I found that the 2 ply, fingering weight version of the Jagger Spun yarn I used was five stitches an inch on size 8 needles. Size 8 needles just happen to be 5mm. The weight of the yarn is important! They didn't necesarily think of knitted fabric the way we do, as a rather solid fabric. So a lighter yarn on a bigger needle makes sense.

I'd love to see a Lion Brand sample, of course, but Franklin Habit wrote about another pattern from the book on Knitty, came to the same conclusion about sport weight, and actually spoke to Lion Brand and they lost all their pre 50s or so samples in a fire.

I'm leaving up the parts of this post where I changed my mind because I think it's important to show how ideas change when you learn new things. Also, sadly, and probably not surprisingly based on the yarn, the sweater I was making didn't work out... 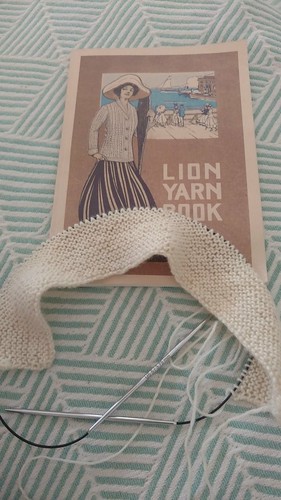 And, here's my knitting, with the book.

For more pictures of the samples, see below! 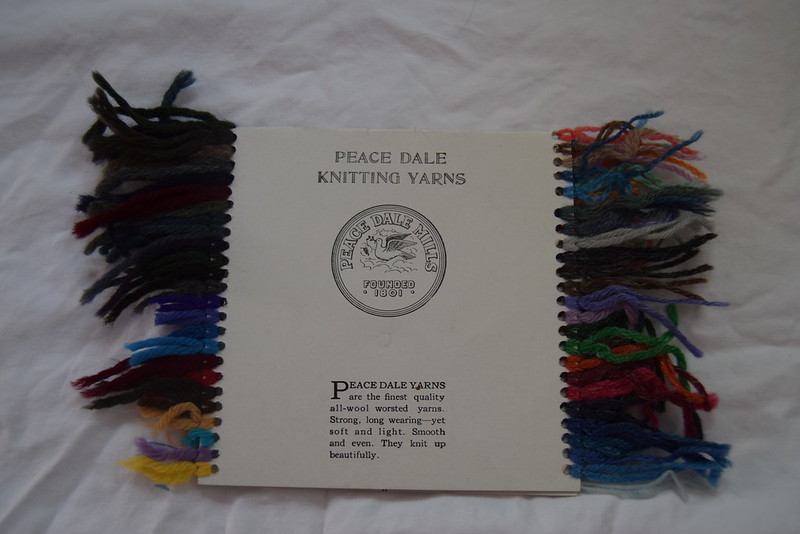 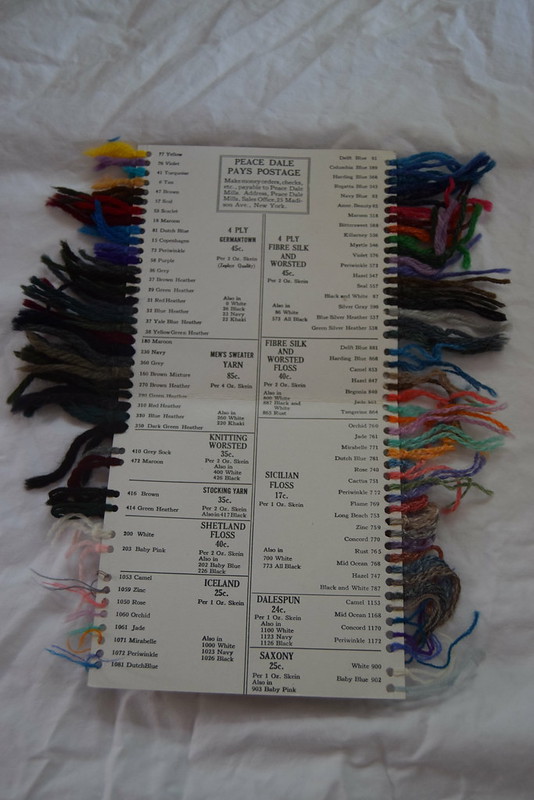 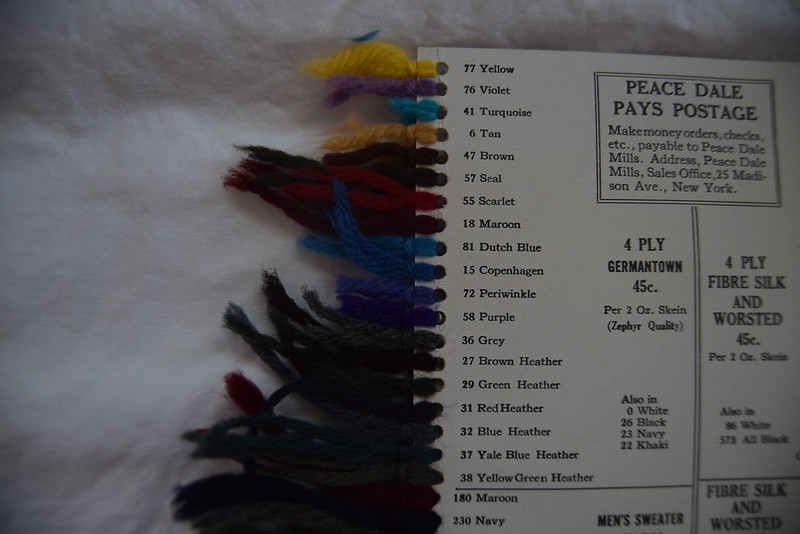 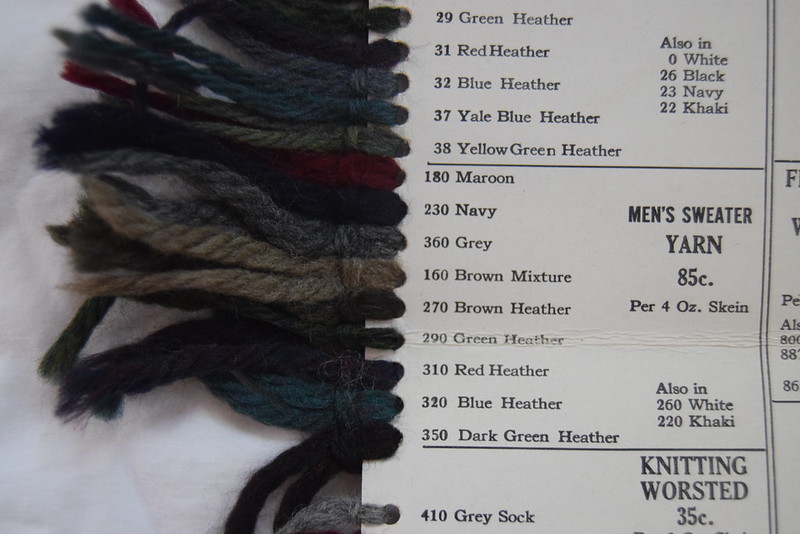 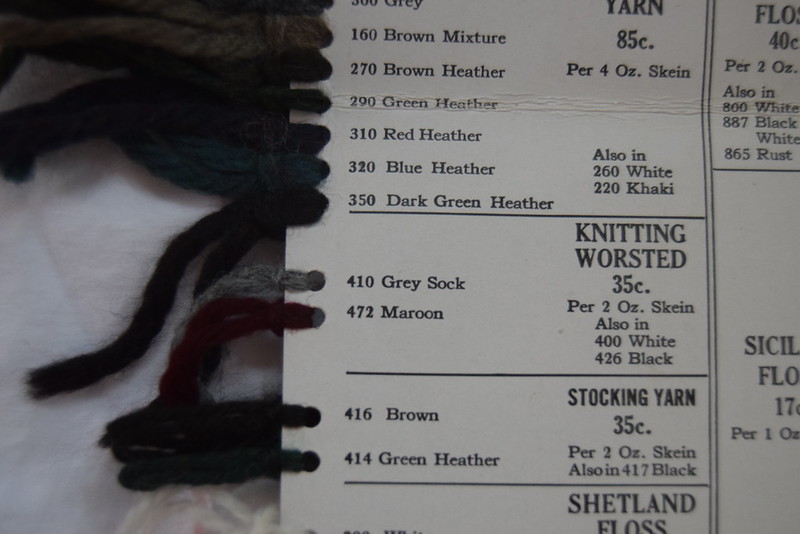 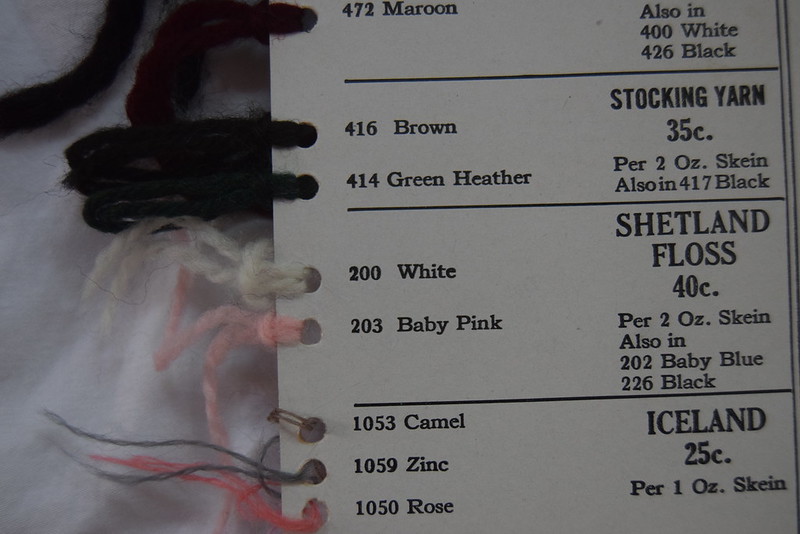 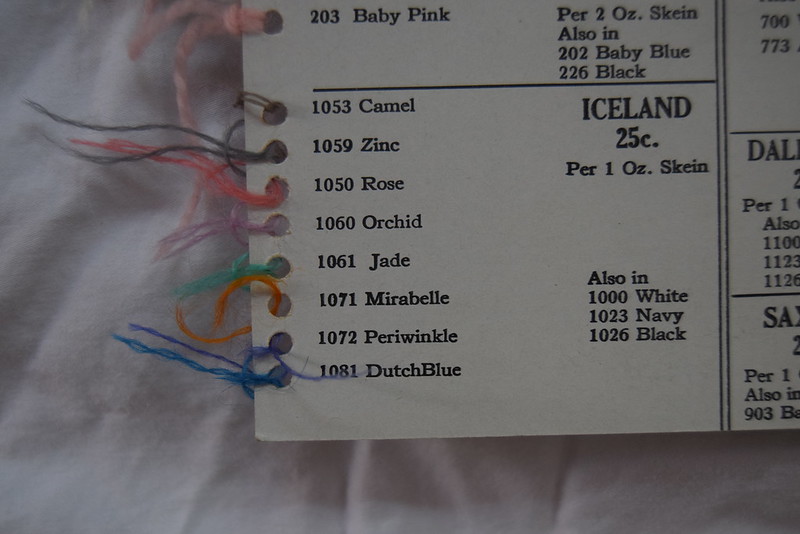 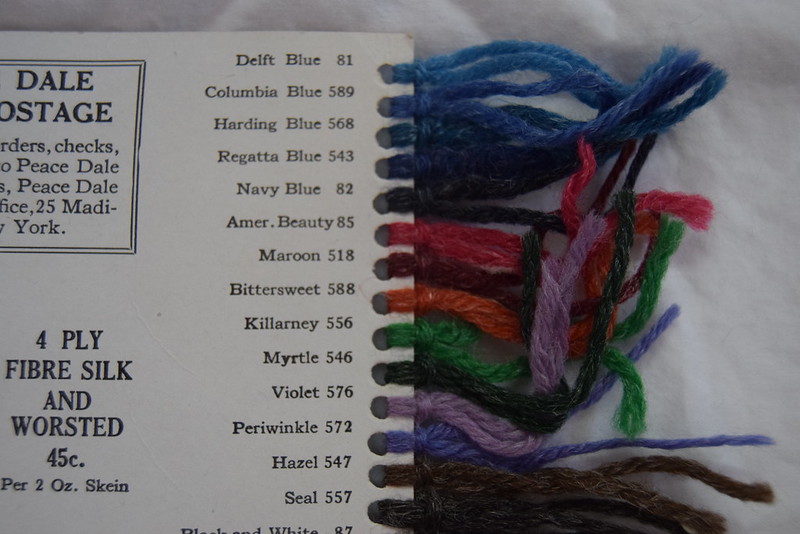 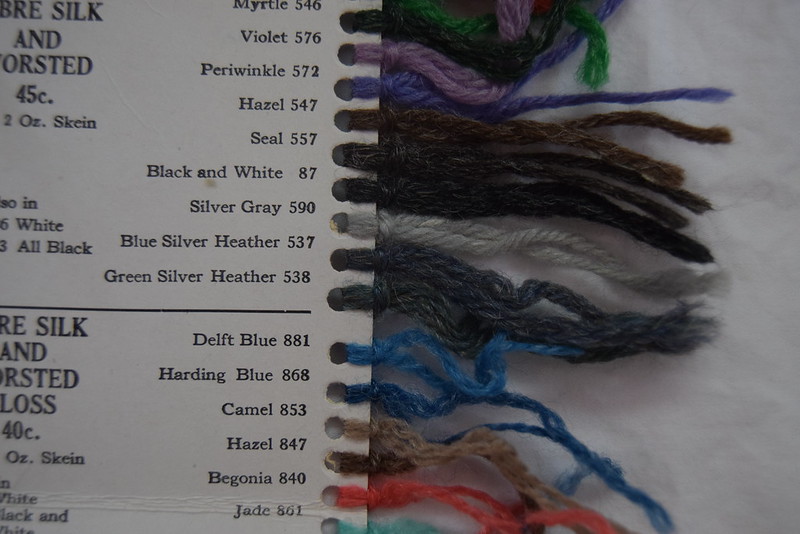 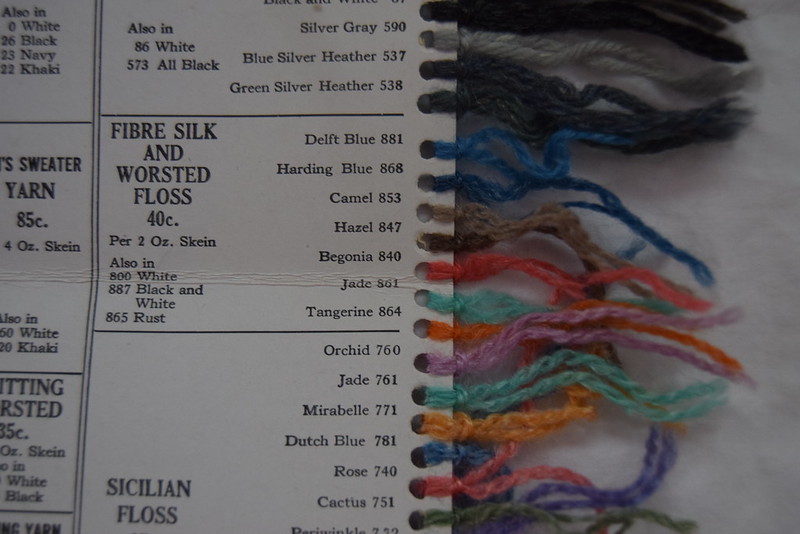 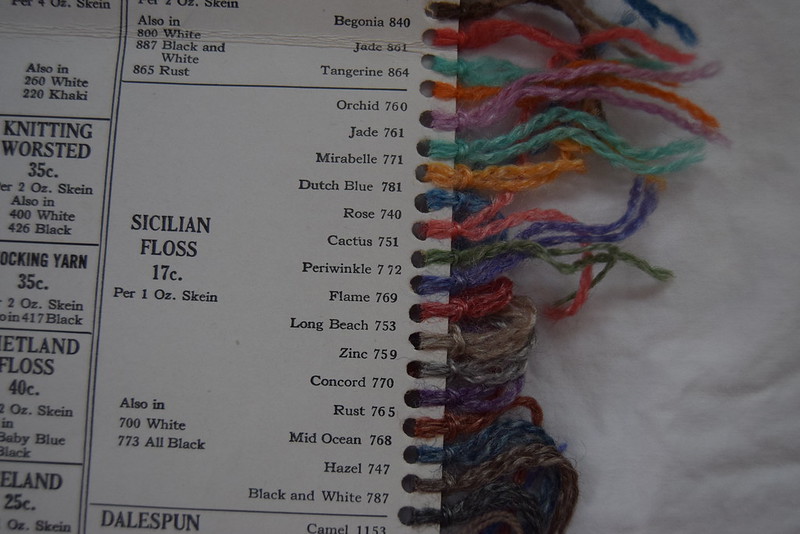 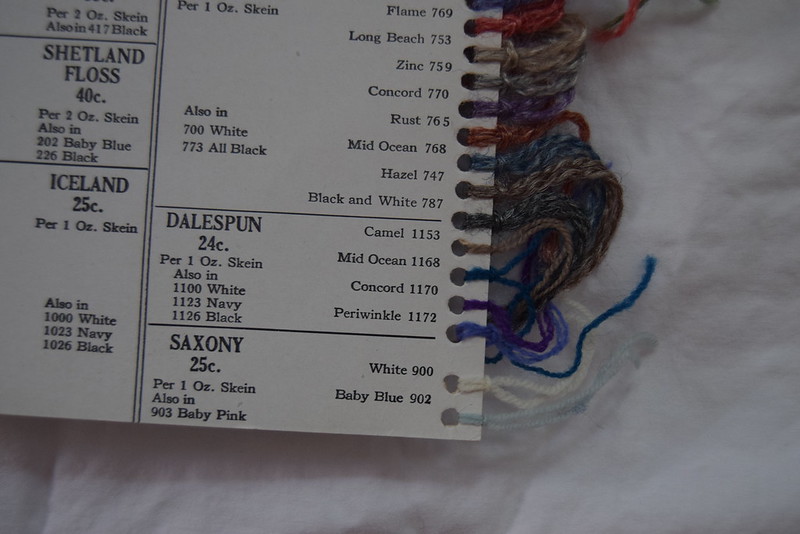 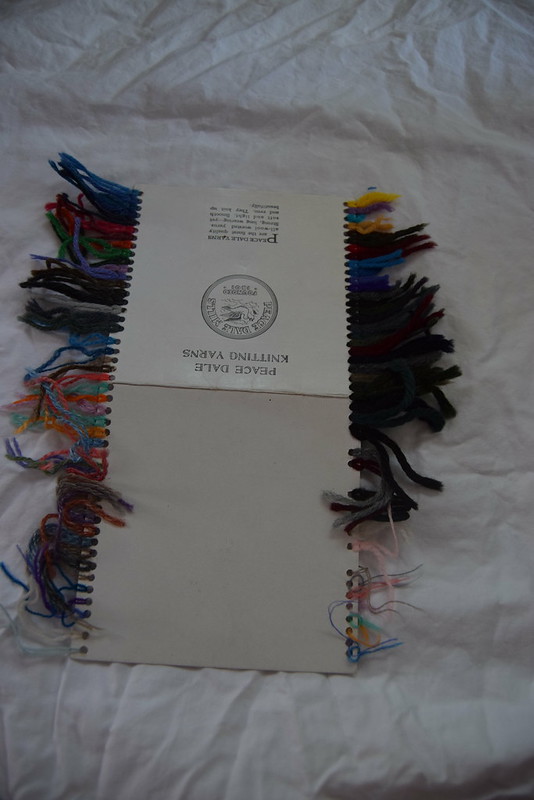 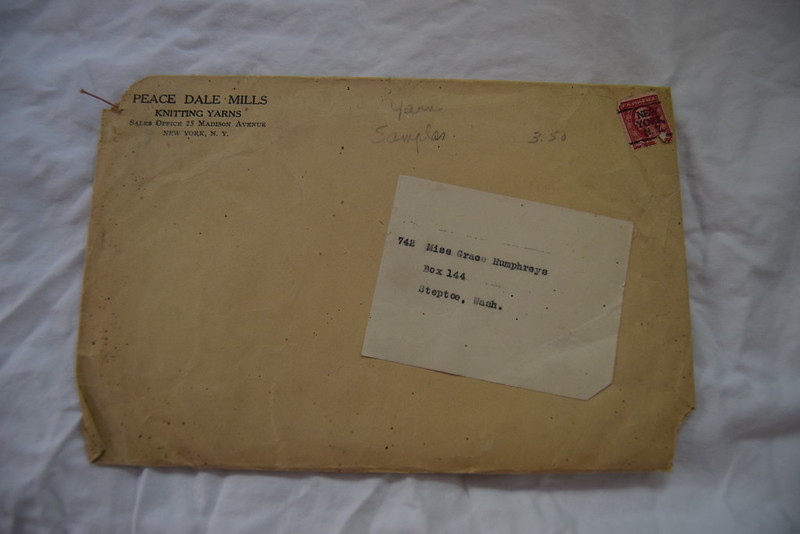 Posted by Katherine Caron-Greig at 12:33 PM